Postpone Nothing is a community helping each other Live Life Now!

We inspire people to act, through examples, dialogue, mentorships, support, and funding.

It might start with a baby step or just a new awareness to break old habits. Reading about and sharing how to live a meaningful life, we help each other act differently.  Each small step towards a goal or accomplishment over time creates massive change in human lives.  We want to promote and support that growth.

This site will share many human stories, we hope to move you to action, recognize personal accomplishment, and bring awareness to your own life and what is important to you.

We hope you will be inspired to visit often and enjoy interacting… Helping others live their best lives starting right now. 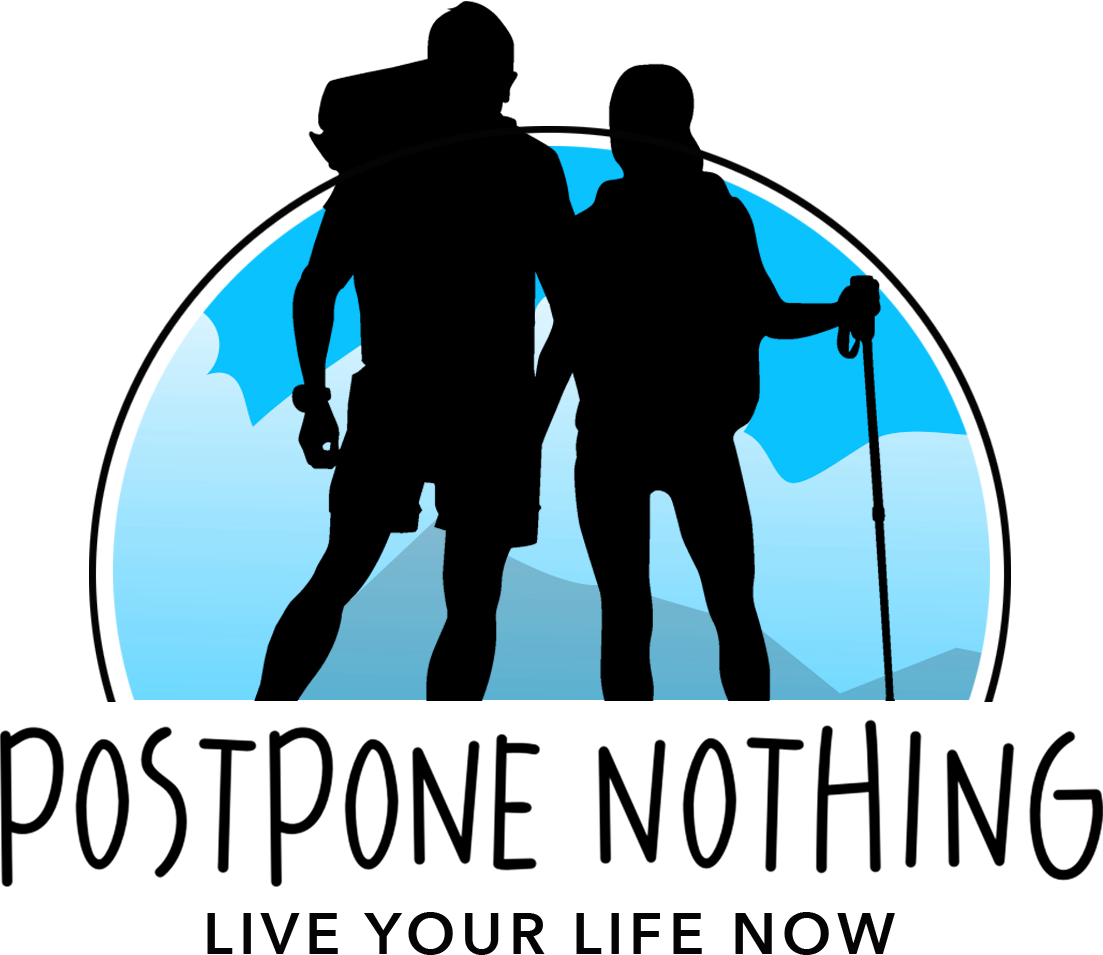 “One day or day one. It’s your decision.” 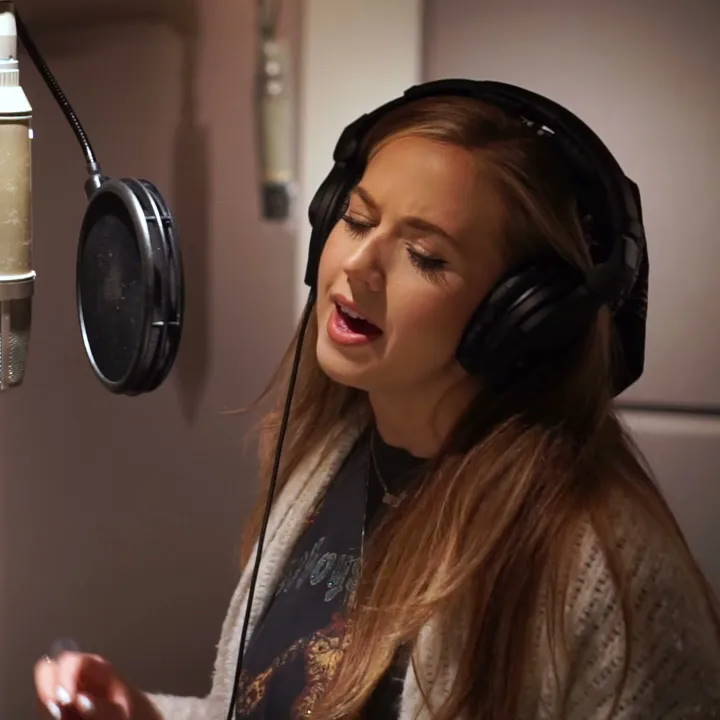 “When I heard Nancy’s story… how she survived through 17 years of battling breast cancer, how she fully lived out her life postponing nothing, and how she wrote her own eulogy, calling all of us to act on living our lives as if it were our last day on earth; I felt called to write this song” shares Caitlin.  “I wanted to be part of Nancy’s inspiring message and help her fulfill her wish to touch the lives of others still living.   Of all the songs I’ve written, this one flowed effortlessly.  I felt Nancy’s presence guiding me.”

About Caitlin Quisenberry:
Nashville’s newest darling Caitlin Quisenberry is bringing her Denver flair to Music City. No stranger to the stage, Caitlin first started singing at age three. When she was 14, she recorded her first EP with multi-GRAMMY-winning producer Robert Cutarella and the following year found herself on American Idol, where she earned a Golden Ticket and was pushed through to Hollywood. While in college Caitlin took her talents to the next level, studying in Switzerland with renowned opera singer Karine Mkrtchyan. Now that she calls Nashville home, Caitlin has teamed up with producers Ben Simonetti (Zac Brown Band) and Sal Oliveri (P!nk, Chris Stapleton) to create music that speaks to everyday life and interpersonal relationships that are easily relatable. Her debut single “Blue,” premiered on CMT and “WHAT IF” was chosen as one of their picks of the week. She was also named “Nashville’s Newest Darling” by Hype Magazine and has received placements in American Songwriter, New Music Nashville, Country Note, ThinkTankNashville, Westword, and multiple Spotify playlists including “New Music Nashville.”

Non-profit organization Postpone Nothing seeks to answer the question ‘How can you change your life today?’ In partnership with rising Nashville country artist Caitlin Quisenberry, they have released a single called “Last Day On Earth” which speaks to a life well lived.  Inspired by the life motto and words of dearly departed friend Nancy Butler, the emotional single encourages listeners to live life to the fullest and postpone nothing.

Since 2020, Postpone Nothing has worked to inspire others to live life to the fullest and not put anything off since tomorrow is not always guaranteed.  While still a young organization, Postpone Nothing has already inspired many to go back to school, travel around the world, prioritize intrapersonal relationships, and live an overall more conscious life.  Through their website, Postpone Nothing has begun to cultivate a community of people helping to support each other to accomplish their life goals through dialogue, mentorships, companionship, and funding.

“What are you postponing?” This question is at the core of Postpone Nothing’s message since the organization’s inception in 2020 by David Cohen after being inspired by his dear friend Nancy Butler and her desire to live life to the fullest after being diagnosed with cancer. In the 17 years after her diagnosis, Nancy climbed 14-thousand-foot peaks, visited 40+ countries and states, jumped from planes, went to national parks, fostered teenage girls, built a house on the river, and headed an organization that conserved 25,000 acres of the headwaters of the Rio Grande. Throughout that time, she encouraged others to “Postpone Nothing” as there is no better time to live out your dreams than the present.

Since Nancy’s passing, Postpone Nothing has dedicated itself to creating a community to help support others accomplish their life goals through advice, mentorships, companionship, and funding, if applicable.  In 2022, Postpone Nothing teamed up with rising country artist Caitlin Quisenberry to release “Last Day on Earth.” The moving and contemplative song encourages listeners to look within themselves and really think about how they would live if they knew their time was limited.

“There is no greater agony than bearing an untold story inside you.”

Click on the image. Help us spread our message and at the same time place a reminder in your home or office to Live Your Life Now!

To order quantities please contact us for a quote. 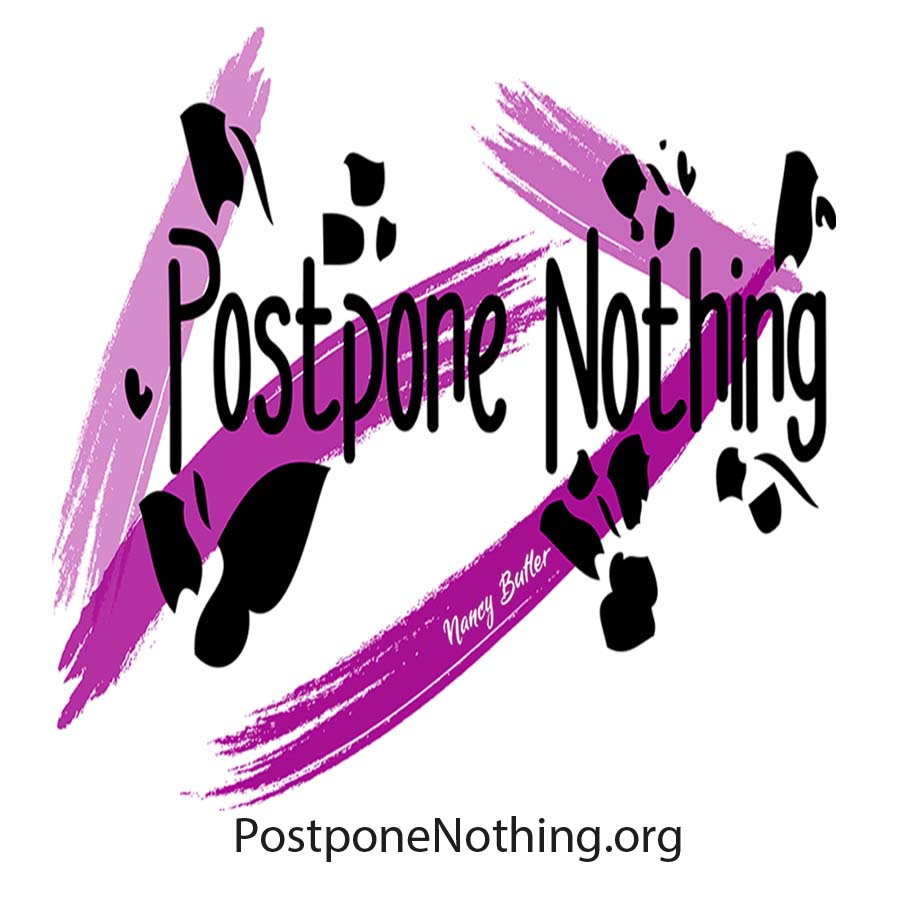 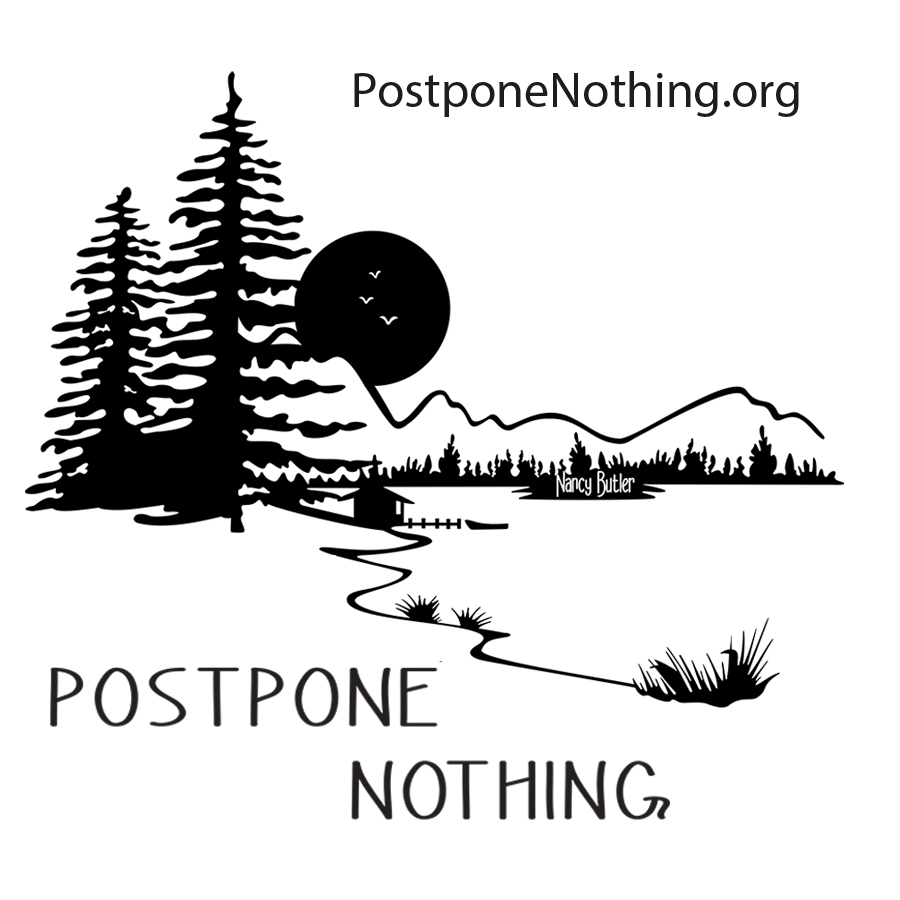 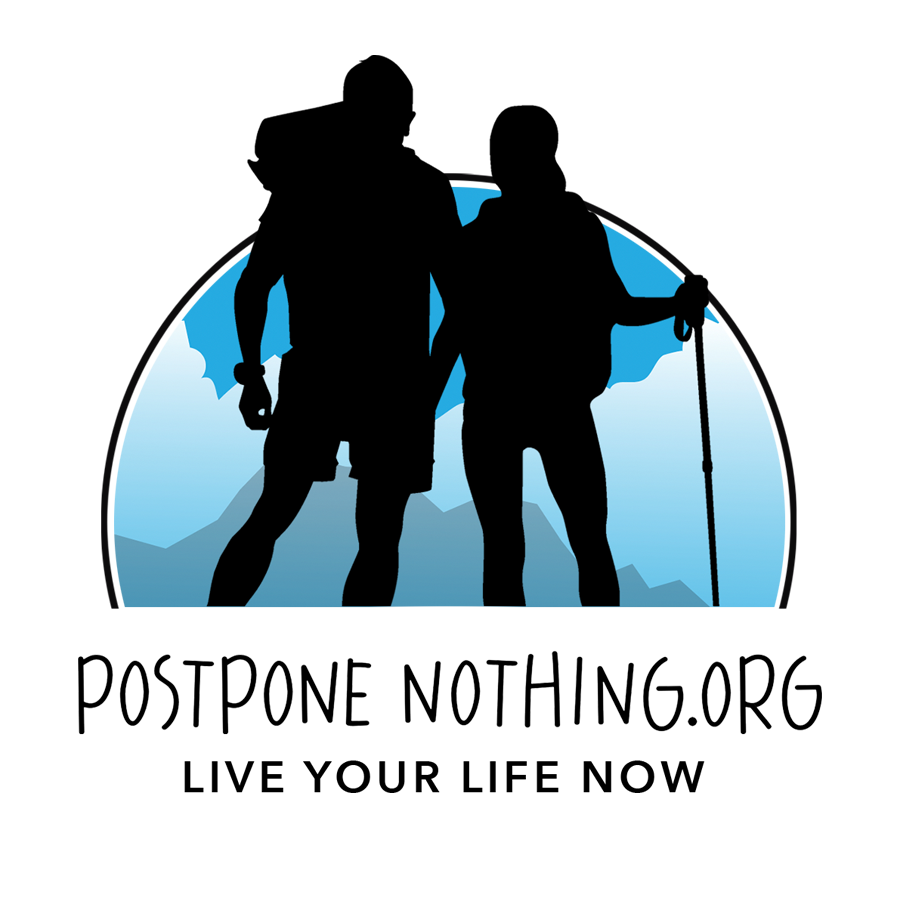 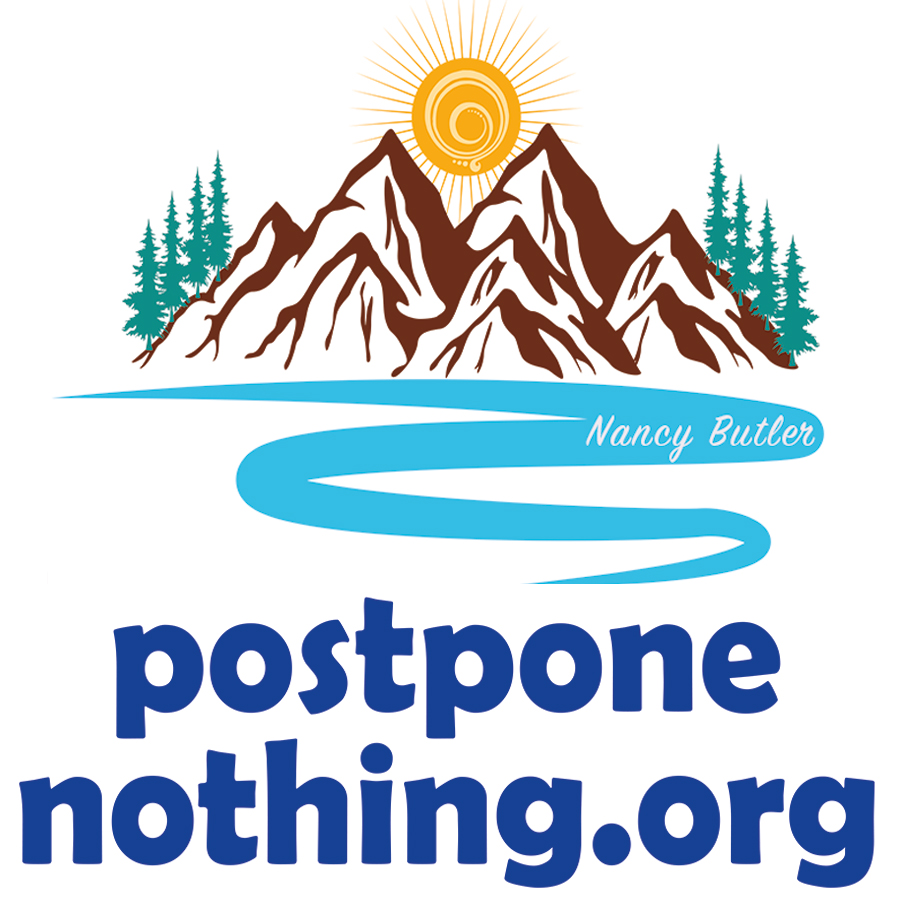 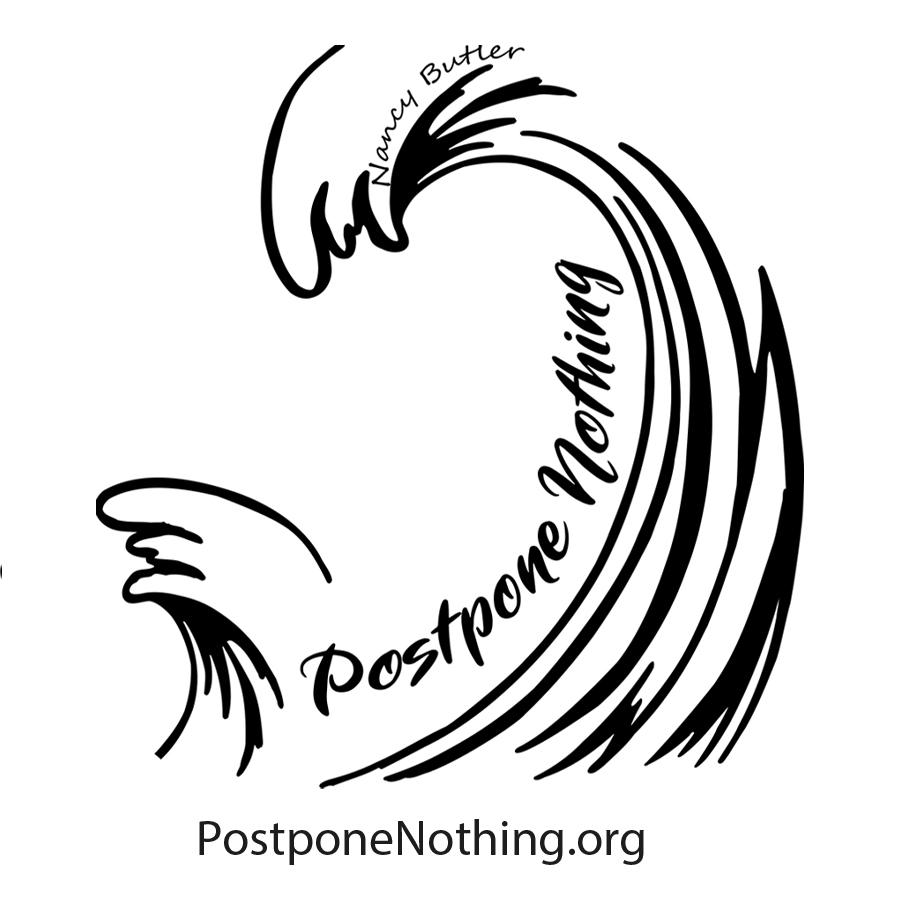 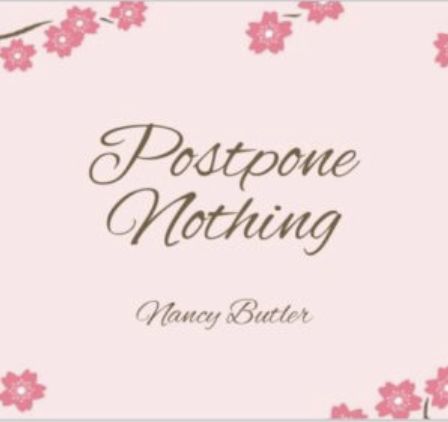 Postpone Nothing
People In Action

“It is never too late to be what you might have been.”

We use cookies on our website to give you the most relevant experience by remembering your preferences and repeat visits. By clicking “Accept All”, you consent to the use of ALL the cookies. However, you may visit "Cookie Settings" to provide a controlled consent. Read More
Cookie SettingsAccept All
Manage consent

This website uses cookies to improve your experience while you navigate through the website. Out of these, the cookies that are categorized as necessary are stored on your browser as they are essential for the working of basic functionalities of the website. We also use third-party cookies that help us analyze and understand how you use this website. These cookies will be stored in your browser only with your consent. You also have the option to opt-out of these cookies. But opting out of some of these cookies may affect your browsing experience.
Necessary Always Enabled
Necessary cookies are absolutely essential for the website to function properly. These cookies ensure basic functionalities and security features of the website, anonymously.
Functional
Functional cookies help to perform certain functionalities like sharing the content of the website on social media platforms, collect feedbacks, and other third-party features.
Performance
Performance cookies are used to understand and analyze the key performance indexes of the website which helps in delivering a better user experience for the visitors.
Analytics
Analytical cookies are used to understand how visitors interact with the website. These cookies help provide information on metrics the number of visitors, bounce rate, traffic source, etc.
Advertisement
Advertisement cookies are used to provide visitors with relevant ads and marketing campaigns. These cookies track visitors across websites and collect information to provide customized ads.
Others
Other uncategorized cookies are those that are being analyzed and have not been classified into a category as yet.
SAVE & ACCEPT
Powered by